Were you stunned today?


There are umpteen times I am stunned in a day.

For instance when I realize I slept with my headphones in my ears.

Or when I am told that my brother ate all the chicken leftover from the night before.

Or when I see a chipkalli sitting on my desk.

Or when I watch on news the complete shameful disgrace of our democracy by the people who are supposed to guard it.

Here I was today, merrily having my dinner of karela (I happen to like it – you may have your stunned moment of the day) when I watched on the news how our parliamentarians made a complete mockery of the words (seem to be just words to them) – Freedom of Speech and Expression.

They were ‘incensed’ (like I was at their sheer thick-headedness) at a particular cartoon (by Shankar) in the NCERT Political Science text book of Class XII which depicts Babasaheb Ambedkar (Chairman of the Constitution Drafting Committee) and the Prime Minister (Jawaharlal Nehru) both brandishing a whip at the snail pace at which the constitution is being written.

Now, the caption beneath this reads and I quote – “Cartoonist’s impression of the ‘snail’space’ with which the Constitution was made. Making of the Constitution took almost three years. Is the cartoonist commenting on this fact? Why do you think, did the Constituent Assembly take so long to make the Constitution?”

Now the answer to this as far as I can remember was that it was taking them so long because of the intricacies of India’s cultural character and the history with which he had emerged and the will to make a comprehensive constitution with an in depth study of those of other countries like France and the United States…but of course who cares that the answer was in support of the constitution drafting committee…the most important thing there is the whip.


Now here BOTH are brandishing whips and asking the 'snail pace' to hurry up, there is NO question of Nehru being a slave driver or Ambedkar being one. If either is portrayed as that, the other automatically falls in the same ambit.

The point made out here is as Miss. Mayawati (who at the time of writing this seems to be getting embroiled in an ‘Elephant scam’ where she seems to have done massive funds blundering in the task of decorating UP with elephant statues) eloquently puts – “Reacting to the controversy, Bahujan Samajwadi Party (BSP) chief Mayawati said, "Dr Ambedkar is a towering personality, who framed the Constitution of India and the Parliament is running on it. This is an insult on Indian democracy. The government should intervene and take strong action against those, who are involved in this. If it failed to do so, we will wait for two to three days or else our party will not allow the House to run."

The point behind such strong words, you ask?


Err...I don’t know. I doubt anyone does. It is the case of the missing point it seems because whatever point could have been about Nehru threatening Ambedkar seems to have vanished into thin air because Ambedkar too holds a whip, and both are using their respective whips at the snail...

Except of course creating misunderstandings and stupidities galore and not to mention move attention away from other pressing matters like her ‘Elephant scam’ to talk of one...

Anyway, my point with this blog post is to basically praise these books and so here I go –

These two books (Contemporary World Politics and Politics in India since Independence) were the best books in my 14 years in school and certainly in high school where text books matter a lot more than they did before. I remember reading them with so much relish that my mother got suspicious because none of my other books ever got that attention from me. I still have them with me and they are filled with notes I took down during class and otherwise, cartoons filled with little tidbits of analysis as we debated them out in class and basically the sign of a student actually engaging in class...but I guess thats just not required or maybe even frowned down upon – what good could it be for anyone if God forbid, someone engaged in a debate and did not just stage a walk out?


Maybe instead of designing a book which encourages free flow of thoughts and creativity and a will to study and know more and which increases our curiosity level, Prof Yogendra Yadav, Suhas Palshikar and the team behind this book, should have designed a book which directs our behaviour and thoughts and teaches us to choose the way of escape any chance of debate and building a character.

For the way they have been treated with attacks at Suhas Palshikar’s office by a bunch of illiterate goons to them resigning from the post of being advisors to NCERT to the sheer shame of Kapil Sibal, HRD minister, apologizing for the cartoon and vowing to withdraw the book from next year, I just feel terribly sad and scared for the India we seem to be fast creating – always incensed with no sense of intelligent debates and a will to allow dissenting opinions and to talk them over and one which is fearful of standing up against such blatant ignorance and violation of the constitution they seem to think they are defending. A book shouldnt by no means be one which the student likes studying or a teacher (in my case a brilliant one - Mrs. Charu Kalra Singhal) like teaching...no not at all! We will vehemently oppose all such aggressive dangerous acts, wont we?


This is unfortunately not a lone incident, freedom of speech and expression and the idea of creative freedom has been run down again and again and again over the recent times – the removal of AK Ramanujan’s essay on Ramayana from the Delhi University syllabus, arrest of a professor in West Bengal for making a cartoon of the residing CM and Trinamool Chief – Mamata Banerjee to not allowing Salman Rushdie to attend the Jaipur Literary Festival 2012 to ones in the past such as driving out MF Husain, fondly referred to as India’s Picasso – because no one here had the will to stand up for him even as he took his last breaths away from the country he loved so much, not even a citizen of it as he died.

And sorry too to all those who fought for this country to be free and create its own thoughts.

At the time of writing this, I went on the NCERT website and opened the web version of the book, only to find it printed across the pages – NOT TO BE REPUBLISHED.

I was stunned again.

Its a sad day indeed.

A picture of a typical page in my copy of Contemporary World Politics (I cannot find my copy of the other book...if unable to find it, I will surely buy a copy before it gets lost in selfish politics) – 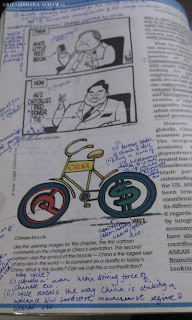