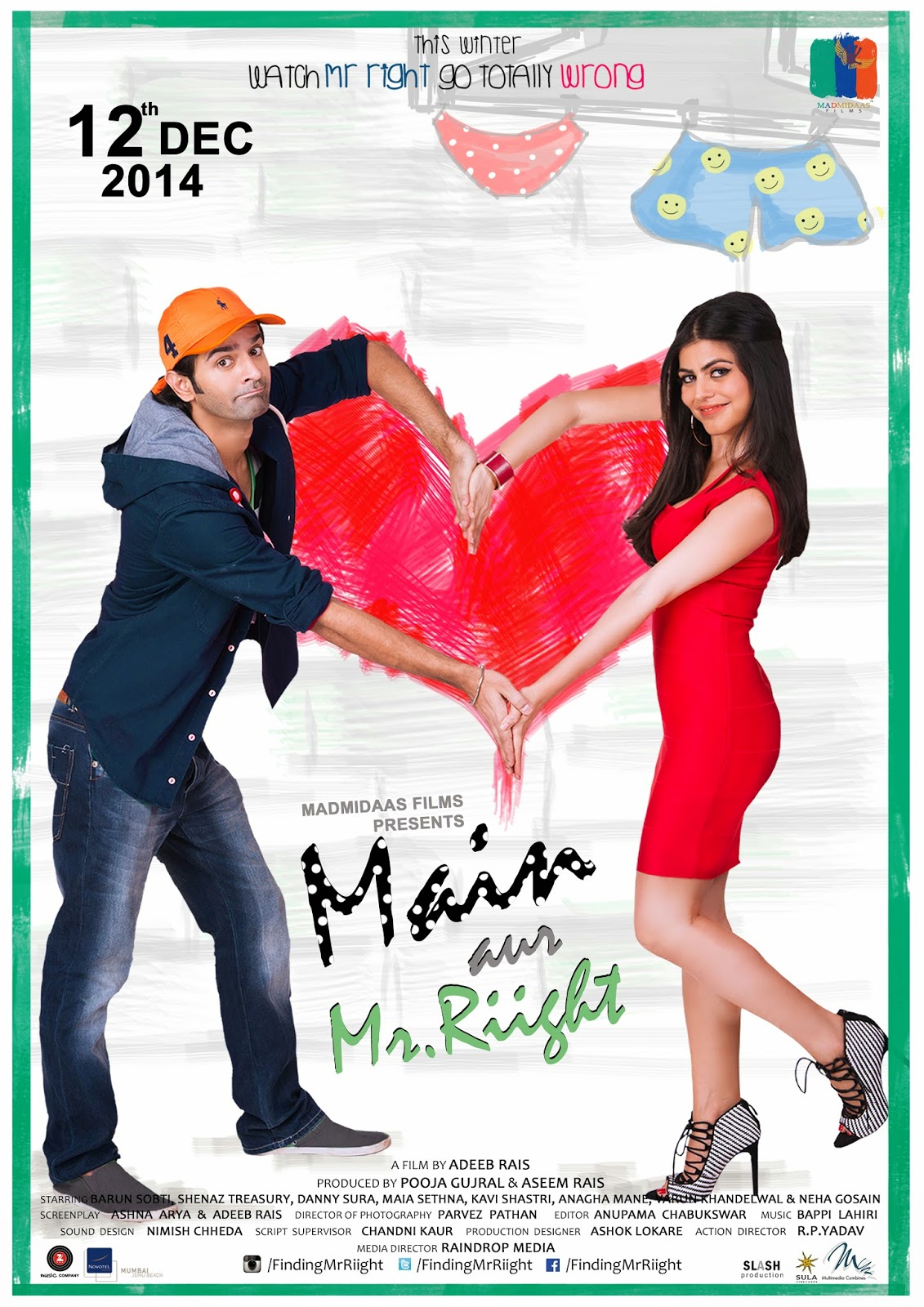 
MAMR tells the story of an independent casting director Aliya Raj (Shehnaz Tresurywala) who is a perfectionist in her personal life as much as she is in her professional life. She is on the lookout or rather is forced to be on the lookout for her perfect Mr. Right. She is also the narrator of the film and it is through her voice and feelings that the audience paves its way through the movie, the characters and their interpersonal relationships.

Tired of her friends’ constant jibes at her inability to find any man good enough for her, Aliya decides to cook up her Mr. Right and casts the wannabe actor ‘born in Punjab, brought up in Delhi’ Sukhwinder Singh aka Sukhi (Barun Sobti) in the 'role'. And thus begins the charade - written, casted and directed by Aliya Raj but does this charade work out - for Aliya and for the movie in itself?

The answer to the latter is uncertain but bordering heavily on a 'No'.

This is Adeeb Rais’ debut movie and unfortunately, if one be blunt, it shows. There is hardly any coherence in the way the story moves forward from the preliminary setting up of the plot. The same plagues his characters who all seem to be confused and more than that confusing, cursed with mistaken rage or just plain lethargy in their conceptualisation and development. All of Aliya’s friends have the irritating habit of dissecting their lives and relationships in full public view and even more annoying is the fact that these outbursts make little connection to what was going on in the story previously. They are all disconnected and hence unenjoyable. What makes it even worse is the terrible performances by the ensemble cast except Kavi Shastri who in his small and meaningless role still manages to infuse some spirit.

The film lacks a proper storyline, seems hackneyed which can still be defended by saying that it is a rom-com on an oft repeated subject so certain plots would be predictable but even then the movie could have had an energetic spirit which is sorely missing. And the worst part, is that the whole movie seems like little scenes which have been put together with little concern for them to make sense in a broader meaning of the term or for them to even be of a slightly high standard. There are many romantic comedies of this kind out there but one roots for those where the treatment is novel and well done if not the story and the plot itself.

However what works for the movie (and the producers seem to have realised it as well if one considers the marketing of this film) is the fantastic work by debutant Barun Sobti who is known for his strong and varied performances on the small screen. Barun’s character is full of energy as would be typically expected of a role of a wannabe actor with Punjabi roots and a not fancy background. And this is where the earlier point resonates. Barun’s character is hackneyed and done to death but he still manages to infuse it with a lovable, energetic, soulful spirit which propels you to sit through 2 hours of the movie and root for the guy! Barun did great work on his part and one could only hope that he had chosen a better launch vehicle for himself. In any case, a little attention on voice modulation and strength and conviction in dialogue delivery should do the trick for him because he already has all the other things down - talent, charisma, presence and looks and of course the fan base. And all of this is underlined when in the second half of the film, one begins to miss Mr. Sobti's energetic and soulful rendition of Sukhi due to the less screen time given to him.

Coming to Shehnaz, she looks confident like her character should and is beautiful but one wishes that a little less attention had been given to her assets and a little more to honing her performance because she could have done this role with a lot more elàn than she does. The surprise package of the film is the guy who plays Aliya’s assistant. I could not catch his name but he was a breath of fresh air, specially in a film where the rest of the ensemble cast seemed to have a competition going on about who could be the most deadbeat performer of them all. Adeeb’s casting for Aliya’s friends (with the lone exception of Kavi Shastri) brings down the film a few notches than what it could have been with actors who actually knew how to act.

The music is a definite plus and I am still humming the soulful ‘Bhool Na Jaana’ and the remix version of Bappi Lahiri's 'Yaar Bina', so that is a job well done.

In conclusion, ‘Main aur Mr. Riight’ looks like an amateur film project with a good budget (as is evident in the overall 'look' of the film) and good marketing (the first look, trailers, posters were all extremely promising) and with one strong performance and a couple of decent ones but with no novel treatment of a hackneyed storyline. However as this is Adeeb’s debut film, one must not lose hope and I wish that he learns from his mistakes and comes back with a better film - story, treatment and casting wise.

Bobby Jasoos is the debut film of director Samar Shaikh and unfortunately it leaves much to be desired.

Set in Hyderabad, Bobby Jasoos tells the story of Bilqis, a woman from a humble background who has no interest in marriage or being a girl as defined by the society but instead dreams of becoming the best darn detective around. However the only cases Bilqis scores are about uncles wanting her to spy on their wife making eyes at the electrician or aunties wanting to know if their daughters are being the good girls they were raised to be. She also has the case of a crime show anchor, Tasawur (Ali Fazal) where her job is to get the dirt on prospective brides so that he can reject them with well found reason. Things change when Bilqis alias Bobby has a mysterious visitor who leaves her huge sums of money to find individuals, giving as details just their name, age and any sort of birthmark. Bilqis soon figures out that there might be something shady going on and tries to uncover the truth about these well paying cases.

Now that a synopsis of the film is done, one can get on to reflections which do not favour the film much. The film is unable to click till at least 20-30 minutes have passed and in that time you also have to bear overacting by Vidya Balan (a suprise there!) who speaks in a Hyderabadi accent so strong that it is almost a caricature. Ali Fazal is charming but only till the moment he starts dancing. There he is way too enthusiastic to pull off the SRK looks, poses and dance moves that he has been entrusted with and you can only feel sorry for the poor guy because he just cannot ape SRK and also he shouldnt. He has the capability of impressing the audiences by just being himself. Bilqis' family is the most impressive of the lot (with restrained acting and thankfully restrained accents) followed closely by Aakash Dahiya as Munna. He doesnt have much of a role but as Vidya's aide he does the job perfectly.

The film is lacklustre in every department. No great cinematography to do the bustling lanes of Hyderabad any sort of justice, no brilliant music score (cannot remember one tune and I saw the film yesterday and it was Shantanu Moitra who has done great work in films like Parineeta and Antaheen!), no brilliant acting [changing garbs is great, especially if you are an Indian actress who come up with gems like not wanting to play a mother on screen because they are in their 'primes' - side question here, if you are an actor should you not be open to EVERY type of role and try to make it convincing? - but just changing your look does not ensure acting, it means that the make-up department did a great work and you carried the look well but you still need to act once you get out of that look...] and the biggest flaw of all - NO story.

The story is such that it has no highs, no lows, no ‘clutch at the seat in worry and then pry away your fingers from the sponge in relief’ - no nothing. It is boring and anti climactic and all of this means that director Samar Shaikh needs to work very hard and choose better stories to work with and also draw out performances from every department because as of now he has a film which has nothing to offer in any department...except the make up - they did a good job.

However one thing must be commended and encouraged. It is a film with a woman leading the pack and for that the producers (Dia Mirza, Sahil Sanga and Reliance Entertainment) must be congratulated. Just hope the next time they get a better story and script and not reply solely on an actor's willingness to don different garbs. It may grab eyeballs but it does not make for good viable cinema.