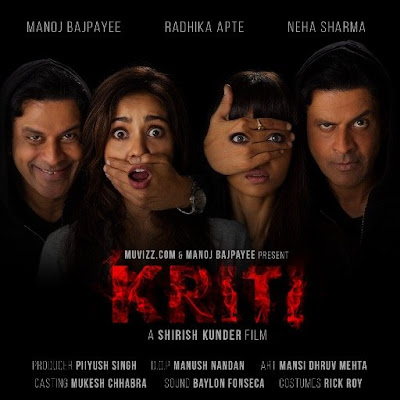 Shirish Kunder's short film Kriti released yesterday on YouTube and since then it has created a buzz on social media. Being a film aficionado and someone who hopes for filmmaking to become more liberal, economical and equal, I decided to check it out.

Kriti is purported to be a psychological thriller about a man who is in love with a woman but is that woman real and can his psychiatrist help him figure it out? As it stars a seasoned actor like Manoj Bajpai (who I remember being deliciously creepy in Kaun?) and everyone's favourite newbie Radhika Apte, I had high hopes that it will knock my socks off.

For a film to be a good thriller, it should make the audience jump off their seats and be awed at the ingenuity of what's happening on screen - none of which Kriti manages to do. It's predictable from the first scene and does not stop being so till the last shot where it starts to spike interest but by then it has ended, literally.

What's worse is that as an audience member I can identity exactly why Kriti goes wrong the way it does. Like most Indian filmmakers, Shirish Kunder seems to have decided to spoon feed his viewers. It is a character in the film itself who reveals the entire plot line in one dialogue. Why do Indian filmmakers believe Indian audiences to be fools of first order who will not be able to add up things together at the end of the movie and work out the twists and turns on their own? Had this one scene not been there, the film may have actually done justice to its genre.

Verdict - My rating would be 1.5 stars for the effort, for trying to break away from the usual style of presenting films and the decent acting but none of it can save a thriller if there is no actual thrill in it.